My friend says I’m getting a grill because I’m getting dental implants. He says Lil’ Wayne has grills. I don’t think they’re the same thing. Who’s right? 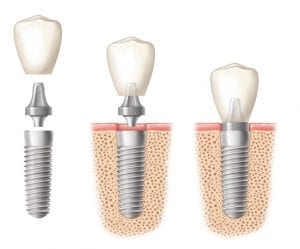 Normally, this would be a straightforward, easy answer. But, you added Lil’ Wayne into the equation which muddies the waters a bit. Lil’ Wayne has gone on the record saying they are not a grill. In fact, he said that he’s dying with them because changing them would require surgery. You can see the conversation in the video below. That would imply that he has dental implants.

So why is that muddy? Because his dentist implied it’s a grill on his website. Though, since then, all articles he had on his site about Lil’ Wayne have been removed. So, either, his dentist wasn’t honest about what happened, Lil’ Wayne just didn’t like him using him to drum up business, or Lil’ Wayne has no idea which procedure he actually had. I do know whatever he did cost him over $150,000, which unless he’s wearing real diamonds, would make me think it’s implants.

A Grill versus Dental Implants

But, to answer your original question. A grill is removable and just goes over your teeth. Dental implants are surgically implanted and are permanent. In fact, they’re as strong as natural teeth.

You can still get them decorated like a grill if you wanted to. It just increases the price for you. Also, unless you’re getting dental implants on all your teeth (which would be ridiculously expensive) make sure you whiten your teeth first. For whatever color your implant crowns are made is permanent. If you want white implants, you’ll want them to match white teeth.